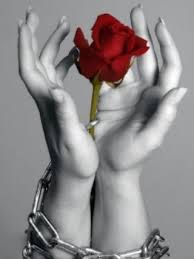 Margaret lay on the puffy white duvet of the motel room bed. She waited patiently in silence. Her head cocked slightly at the sound of a car horn passing, but otherwise she remained perfectly still.

The rope binding her wrists behind her back was the same white as the rope binding her ankles. It was more cream than the duvet. The blindfold, however, was black with her blonde curls flowing out from beneath the elastic holding it on.

Her head again shifted as she thought she heard something.

As ordered, she had arrived two hours ago. She wore her shortest black skirt to her thigh, her highest black boots to her knees, stockings almost up the skirt, and a tight white blouse…again, all as he had told her.

She and Mitch had been texting back and forth for over a year and finally had a chance to meet as his business had finally brought him the seventeen hour drive to Margaret’s town of Thunder Bay from his home in Toronto.

So, for the first time, Margaret saw him without pixels. She had felt naked even though still fully dressed.

Mitch, wearing a shirt and tie from client visits, slowly circled his prey slowly, limping on a black walking cane with a silver tip, to inspect. “You’ll do,” he said…the first words to have escaped his lips. He then handed her the blindfold. “Wear this and nothing else.” Mitch sat in the chair at the small desk and watched her undress.

Margaret stood completely naked and slipped the blindfold on. She then allowed the phantom hands to guide her onto her side before they tied her up. For two hours, she lay on her side with nothing.

After two hours, she was near ready to give up and use the safe word they had agreed on. A slight sigh and her mouth opened to speak it, but she was stopped as her lips found flesh.

How did he get on the bed without her noticing?

What was that delicious taste?

Her lips found it again. A finger, she guessed, as not big enough to be anything else.

This time it was pushed deeper into her mouth and tasted of nacho cheese.

Margaret sucked the cheese from it, loving the flavor. Next, however, her lips were met with something larger than a finger. She opened her mouth and the erection felt massive in her mouth.

The finger, and the hand it belonged to, slid over the back of her head and pulled.

Margaret started to gag with how far the cock went into her mouth. She held it as long as she could before protesting and pulling back against his hand. Her mouth, with drool dripping, fought to catch her breath as she pulled off.

Her cheek was smacked lightly, punishment for resisting.

As soon as she caught her breath, the erection fucked her mouth again. Even deeper this time, but she did not gag. This time she was prepared.

What she was not prepared for was the feeling of a hand pinching her bare ass.

How was this guy able to do that while holding the back of her head?

The warmth of the second body sidling up behind her was also a surprise.

Margaret almost jumped, feeling the second erection poking her in the back.

Her ass cheeks were spread by the other hands and the second erection pushed between them. It found her anus and slowly pushed its way in.

Margaret gasped and suddenly found her mouth reaching for empty air as the initial erection vanished.

The second erection pulled out as well.
Margaret was lifted into the air with a hand on her back and one under her knees. She was held up against a warm powerful torso as the sheets tussled on the bed. She was then lay back on the bed, with knees spread so she could straddle one body beneath her. The binding from her ankles were released to make this easier.

That erection slipped into her soaked pussy.

Margaret groaned with the pleasure of her clit rubbing against it.

The second erection pushed back into her ass from behind. His hands grasped the binding around her wrists to balance her and then matted into her hair to pull hard.

The hands of the man beneath her found her small breasts for aim, before his teeth bit down hard at each.

Orgasm hit Margaret like a wall of bricks. She screamed out her pleasure, likely waking those in the next room.

She felt both men, in turn, shudder in orgasm. Then all was quiet again as they pulled out and vanished leaving her on her side again.

A few moments of silence were briefly interrupted by the sound of sink water in the bathroom.

Margaret lay quietly when she felt the hot breath on her ear.

“Do not move,” Mitch’s voice instructed.

Hands then released the binding at her wrists.

For ten minutes Margaret remained as motionless as she possibly could.

Mitch’s voice came to her, “You may remove the blindfold.”

Margaret got up onto her knees and sat back. Her vision was greeted with Mitch sitting in the chair exactly as he was when she put the blindfold on.

Mitch stood and leaned on his black cane as he stepped to her. He took her right hand in his. “Thank you, m’lady.” He kissed the top of her hand. Turning, he made his way out of the room only stopping to slip into his black overcoat hanging in the front closet.

Margaret allowed herself a few deep breaths. As she took in what had happened, she glanced around. Her eyes were captured by four, obviously used condoms laying at the foot of the bed.

This site uses Akismet to reduce spam. Learn how your comment data is processed.

All rights reserved. I hereby assert my rights as the author/creator of original material and images posted on this site. No part of this website may be reproduced or transmitted in any form or by any means, electronic, mechanical, photocopying, recording or otherwise, without prior permission of the website owner. Any Person or Persons found to be infringing copyright will face legal action.